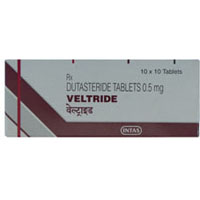 Dutas is the generic brand name for Dutasteride, an oral medicine made by GlaxoSmithKline for treating symptomatic benign prostate hyperplasia (BPH) in men. Dutasteride, has the added benefit of treating genetic male pattern hair loss on the vertex (top of the head) and the mid-scalp area. Dutas is chemically similar to Finasteride, the active compound in Propecia. Dutas is also known by its US brand name, Avodart. The medicine has been approved by the US Food & Drug Administration, and in Europe, for treating BPH. Dutasteride is supplied in 0.5mg soft gelatin capsules.

How does Dutasteride work?

Researchers have discovered that men who suffer from benign prostatic hyperplasia (BPH), or from male pattern hair loss, have increased levels of the hormone dihydrotestosterone (DHT). DHT is produced from testosterone by an enzyme called 5-alpha-reductase. Biochemical analysis reveals higher levels of 5-alpha-reductase in the bloodstream of men with BPH, and in the scalps of men with hair loss; and less of this enzyme in men with no BPH or no hair loss. Dutasteride inhibits 5-alpha-reductase, blocking the formation of DHT. This interrupts a key trigger element in both BPH and development of male pattern hair loss.

DHT is one of several male hormones in the body. DHT is responsible for the development of the external genitals in the male foetus. However, in adult males DHT appears to cause:

How is Dutasteride different from Propecia?

Both medicines work in a similar way. However, Dutasteride inhibits the activities of two types of 5-alpha-reductase enzymes. In contrast, Propecia (Finasteride) only inhibits one type. It has been shown to decreases levels of DHT by 90% after only two weeks, making it a more powerful and faster-acting weapon against BPH and hair loss than Finasteride.

What studies and trials have been done concerning Dutasteride?

A total of 2951 men with moderate to severe BPH were treated with 0.5 mg Dutasteride daily. The study found that acute urinary retention was reduced by 57%, and the risk of benign prostatic hyperplasia-related surgical intervention was cut by 48% compared with placebo. The drug was shown to be well tolerated.

So these initial trials show that Dutasteride is around 30% more effective than Propecia in promoting hair regrowth. It is approved by the US FDA and by European bodies for the treatment of BPH, and so has passed all relevant safety standards. However, please note that it has only been specifically approved for treating BPH. It has not yet been approved specifically for treating hair loss.

Will Dutasteride help hair re-growth for all men?

As with Propecia, it increases the number of scalp hairs, helping to fill-in thin areas of the scalp. Although results will vary, generally men will not re-grow all of the hair they have lost. Male pattern hair loss occurs gradually over time, but it can significantly reduce or delay hair loss. Note that Dutas is not yet approved for treating hair loss: its effects are a side-effect of its actions against BPH.

Clinical trials showed that it was generally well tolerated. Most side effects were mild or moderate and generally went away while on treatment in both the Dutasteride and placebo groups.

It should not be used in women and children. Women who are pregnant or may become pregnant should not handle this medicine because of possibility of absorption and subsequent potential risk to a male foetus.

Men treated with Dutasteride should not donate blood until at least six months after their final dose to prevent the medicine going to a pregnant woman through a blood transfusion.